The Krakatau Volcano
by antonio kuilan

On August 27th 1883, Krakatau fiercely exploded, becoming one of the most violent eruptions in geological history. For nineteen hours, it belched its volcanic contents high into the stratosphere, with ash raining down to Singapore—541 miles to the north—and even to ships as far as 3,775 miles west-northwest. While the catastrophic eruption sent pyroclastic surges at 24 mph, its mammoth blast created volcanic earthquakes that generated seven towering tsunamis up to 130 feet high that crashed into 165 coastal villages in Sumatra and Java, devastating them and causing nearly 40,000 fatalities. The waves were so monstrous, they managed to travel some 4,300 miles away, reaching the Arabian Peninsula. Achieving a 6 on the Volcanic Explosivity Index scale, its explosive scream was so powerful, that the ensuing pressure waves were recorded by every barograph on our planet. Its gases and ash veiled the atmosphere, resulting up to a 1.2 degree drop in Earth’s mean temperatures over the next five years – even causing vivid sunsets over America and Europe for three years before quietly subsiding from history. Let’s explore this volcanic wonder called Krakatau.

Indian Ocean, Krakatau is located in the Sunda Straits, nestled between the larger islands of Java and Sumatra in Indonesia. Krakatau is adjacent to two immediate smaller islands: Verlaten and Lang. It is important to note that an ancestral Krakatau volcano collapsed in 416 CE and created a nearly 5 mile wide caldera. Remains of this volcano can be fo

und on the islands of Verlaten and Lang. By 1883, there were 3 major volcanoes on the Island of Krakatau: Rakata, Danan, and Perboewatan.  The 1883 plinian eruptions of these volcanoes were so powerful, that it engulfed two-thirds of the island, slightly over 8.8 square miles. All three towering composite volcanoes were reduced to another large caldera, leaving but a fragment behind. With time, Anak Krakatau was born in 1927, also known as the “Child of Krakatau.” Therefore, when one speaks of “Krakatau,” it generally means the island and its immediate volcanoes.

It is difficult to pinpoint the exact volume/size of Krakatau. This is due to the rich geologic activity of the area and the weekly exponential growth of 5 inches by Anak Krakatau. Though Smithsonian Institution depicts Krakatau with an elevation of 2,667 feet high, it is unclear if this figure applies to Anak. However, in the Indonesia Journal of Geology (2006), it marks the elevation of Anak Krakatau as reaching 1,033 feet high from 1930 to 2005 and the latest volume measurement from the year 2000 at 5.52 km^3. The paper suggests that if the height and volumes are consistent in growth, it predicts that in the year 2020 the volume of Anak will proceed the volume of the prior Rakata, Danan, and Perbuwatan volcanoes.

While Indonesia is home to approximately 130 active volcanoes along the 1,864 mile long island arc, Krakatau is a notable one. It rests on the Pacific “Ring of Fire,” where the volcano was forged by the subduction of the Indian-Australia plated under the Eurasian plate – both are continental plates. Its approximate geographic coordinates are 6.102°S 105.423°E  and the last eruption occurred on October 25th 2010, lasting through January 1st 2011 with a VEI of 2 – making a total of 110 confirmed eruptions in its entire recorded history.

The type of lava linked to Krakatau is viscous rhyolite lava, however, it was discovered that 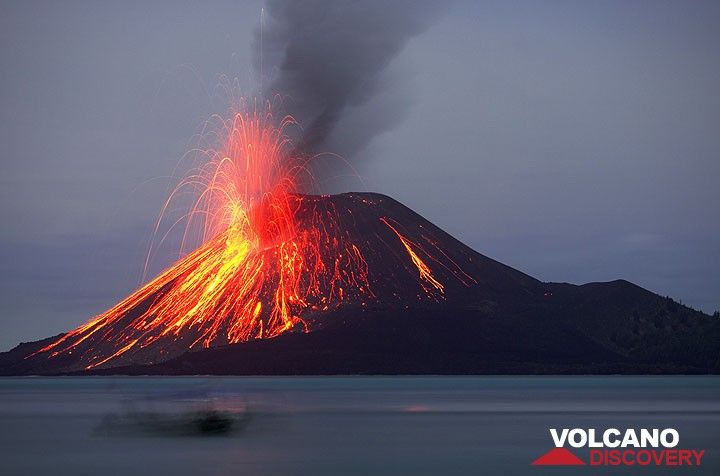 fluid basaltic lava exists at Krakatau, this is referred as “bi-modal,” meaning two modes of magma co-existing next to each other and may at some point mix. It was thought that mixing of the two magmas can set off super explosive eruptions, such as the 1883 eruption, and recent chemical analysis from material ejected from the 1883 blast suggests that bi-modal mixing did occur. The types of hazards associated with Krakatau are lahars, pyroclastic surges, debris, volcanic bombs, tephra, gases, lava, and ash. In the event of an eruption, the immediate coastal areas of Southern Sumatra and Western Java will be the most impacted and the entire regions of Southern Sumatra, Western Java, and Belitung Islands are susceptible to Krakatau’s hazards.

We have explored Krakatau’s historical 1883 eruption, its geological setting, the rising

growth of Anak Krakatau and its latest measurements, its hazards, the bi-modal discovery, and the vicinities that will experience the exhalation of Krakatau. But no one knows when it will decide to awaken and what scale it will choose on the VEI. In a recent documentary, geologists circled the island and stated it is a ticking time bomb. Depending on its activity, it may cough simple ashes, or it may decide to let the world hear its voice once again. What we do know is that the “child” is growing expeditiously on its own time scale, quietly contemplating its next musical notes while basking in solitude among its dead ancestors.

“Change is the only constant.”