For a long time, I have been fascinated by the use of film, voice, and music to communicate science information in a storytelling manner. Science can sometimes be so soaked in jargon that it will scare off the non-science person. Film has the power to convey ideas with visual stimuli and seduce the viewer’s mind with a storytelling narrative. Carl Sagan realized this and went on to create Cosmos, a 13 part science-storytelling series that influenced millions, including myself.

About two years ago, I had created a simple small video based on pictures and myself doing a voice over to introduce NAGPRA in the latter part of the video for a North American archaeology course. This video-presentation was created out of my slight fear of public speaking. However, this placed the seeds of understanding the mechanics of storytelling via digital media and its power to communicate information. These mental seeds kept germinating, leading me to search my current university for applicable courses. Sure enough, documentary filmmaking courses existed.

The first course that I registered for was called “Directing the Documentary.” As an added benefit, there was a last minute change with the course’s instructor: Peter Schnall ended up being the professor. Peter Schnall has directed many National Geographic documentaries, that include Inside the White House, Inside the Secret Service, and George W. Bush: The 9/11 Interview. I particularly enjoyed his 2013 All The President’s Men Revisited, hosted by Robert Redford – one of my favorite actor and activist.

Schnall turned out to be one of my most liked professors due to his authentic passion in teaching students. He went beyond the prescribed syllabus and dispensed real-world knowledge, answering every question with Zen-like wisdom. He even brought in his newly acquired circa $50,000 camera/lens kit to teach us the fundamentals of the actual hardware used in his productions and in the real-world. Show off 😉

Armed with Schnall’s teachings and some camera/audio equipment, I set forth to attempt to capture the ostracod research story at Rutgers via video. This is the resulting ten minute documentary, “Ostracoda”:

One of the biggest challenges in creating Ostracoda was not only how to create a story out of something laced in scientific jargon, but how to shape the story out of the footage and interviews that I gathered. In the editing process, I have realized the importance of the art of crafting questions. Luckily, I had good access to my subjects and I was privileged to re-interview them a 2nd time.

I believe visuals are a HUGE deal in conveying material and concepts, especially in science related subjects. Although I’m slightly disappointed on my zero knowledge of creating animations, I did manage to get some informative shots in this documentary.

Some self-critique on my own work are:

The rendering process consumed quite a bit of time and I uploaded as-is by request to meet the deadline for submission. I’m reworking some parts to hone the issues listed above; I’ll update the original YouTube link and this post when completed.

I snapped this photo from a high elevation point around Lower Salmon River Canyon, Idaho – some 50 miles away from Hell’s Canyon. 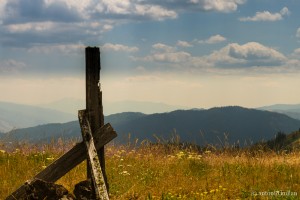 “Archaeology is anthropology or it is nothing at all.”