Let me say that again: I love Jane Goodall.

I share the love that many others have for Dr. Jane Goodall, who is probably the world’s beloved primatologist, so I hope that my thoughts here are not interpreted as hate, but as an academic insight.

Recently, The Washington Post has called out Jane Goodall for plagiarism. They invited a botany expert to review her new book–Seeds of Hope: Wisdom and Wonder from the World of Plants–but declined the task after encountering passages that were plagiarized. Most of the material were literally lifted verbatim from a variety of websites.

Jane Goodall has since admitted to the accusation and issued an apology:

“This was a long and well researched book and I am distressed to discover that some of the excellent and valuable sources were not properly cited, and I want to express my sincere apologies. I hope it is obvious that my only objective was to learn as much as I could so that I could provide straightforward factual information distilled from a wide range of reliable sources.”

Even before the apology was issued, many fans were exclaiming, “we love you Jane, we forgive you!” 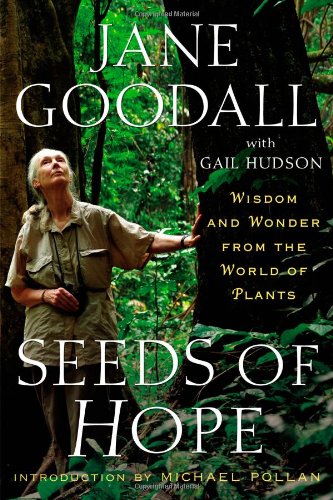 The same tune was being whistled in nearly every social site. Reading through some of the comments via a Huffington Post Facebook page that linked the Goodall story, I encountered a high school student who expressed that there is no forgiveness in school if you plagiarize and that “…she should be slammed.” A user claiming to be a Ph.D scientist replied to him, stating that the “…real world is a little different than your high school experience,” and that once he writes research papers and author books, “things can fall through the cracks” when handling references. He went on to say that it wasn’t a big deal and that he should wait until he “…obtain a level of education” that is on par with Goodall before opening his mouth. This user wielded his Ph.D and belittled the high school student.

Other users relished the Ph.D’s reply.

This upset me, triggering this post you are reading.

What kind of message is this sending to the younger generation? Hey kid, shut your hole, Goodall made a “mistake” and you are worthless? Or that it is ok to plagiarize once you obtain a certain level of education or status?

The high school student, and the comments of other college students are correct: You will be academically crucified when committing plagiarism.

Here are some of the consequences:

The consequences are immense. Is Jane Goodall immune? Here’s a snippet from The Washington Post’s original article:

“By academic standards, however, the content-copying of ‘Seeds of Hope’ is unacceptable, said Lena Struwe, a plant biology professor at Rutgers and director of the university’s Chrysler Herbarium, who publishes a blog called Botanical Accuracy. If a Rutgers graduate student turned in a paper containing similar infractions, she wrote in an e-mail after reviewing the examples, the student would be reported to administrators, punished and possibly expelled.”

What exactly did Jane Goodall plagiarize? According to the article, she lifted entire passages from websites such as Wikipedia, a tea site, and a tobacco site. Here’s one passage she used from a tobacco history page (the bold words indicate the words from the site):

““In South and Central America the Indians smoked tobacco in pipes of many shapes and sizes, often elaborately decorated. It was sometimes chewed or used as snuff to ‘clear the head.’ Tobacco was also used as a remedy for such varied conditions as asthma, bites and stings, urinary and bowel complaints, fevers, convulsions, nervous ailments, sore eyes, and skin diseases. Some tribes cultivate tobacco as an insecticide to protect themselves against parasites.”

You can find other examples via The Washington Post’s article, including those from Wikipedia. Wikipedia, wow, the first thing the majority of traditional professors advise students against is the use of Wikipedia as a source. Apparently, it’s OK for Goodall to “borrow” from the site.

Let me go back to the high school student/Ph.D scientist Facebook interaction for a second. The Ph.D guy blasted the student because of not having the level of education Goodall has. I love Goodall, but let’s not forget, she obtained an accelerated Ph.D WITHOUT having a Bachelors or a Masters degree, or any prior college experience. She was a mere secretary that had the good fortune to be sent to Gombe by Louis Leakey – whom also arranged for her Ph.D a few years later. Her adviser criticized her methods and told her she was doing her research wrong. Nevertheless, her adviser approved her thesis. In Goodall’s own words, “I didn’t want a Ph.D…; I spent as little time there as possible,” referring to her time at Cambridge University.

Is it ever acceptable to forgive a Ph.D for plagiarizing?

What is intimidating is that Goodall stated this “…was a long and well researched book,” with “…excellent and valuable sources.” Does lifting passages verbatim from websites such as Wikipedia define a “well researched book” with “excellent” sources?

Let’s face it, “Jane Goodall” is now a brand, and will continue to be a brand long after her

death. Slap that name on a book, event, or plush chimp, and it’s instant credibility…almost guaranteed to rake in sales. Like most brands, you must keep producing. Goodall is no exception. Was Goodall under some sort of deadline to produce the book? Did she exercise a lazy method and padded the book with web material?

Journalist, science writer, and author Jonah Lehrer was a plagiarist that when exposed, was forced to resign from The New Yorker, was terminated from Wired magazine, and the publisher pulled his book from the shelves – even offering customers their money back.

What makes Jane Goodall immune? Her orchestrated apology also stated that the book will go forth and that she will make sure that any second edition will be properly cited, though in the case of Lehrer, he was thrown into the lion’s den. I still can’t believe Goodall plagiarized, yet I still love her. What makes Goodall immune is her genuine charisma, her angelic passion for chimpanzees, and her soft spoken words that will tame a raging storm. She is the Mother Theresa of the Gombe forest.

The critical thinking neurons tell me that she should be penalized like every other to the core, but my heart sees her authentic kindness and wants to comfort her, gently patting her on the back, “there…there..it’s ok, just a minor oversight..you are so revered that the offense is excusable.”  I think most of us feel the same way. A case of sympathetic plagiarism.

A favorite anthropologist of mine, Wade Davis, gives a fantastic lecture on why ancient wisdom matters in the modern world.

It seems there a couple of variations of this lecture, but in my opinion this version is a gem. Nearly 1 1/2 hour long with a short Q&A afterwards. Below is the link that will take you to full video:

Why Ancient Wisdom Matters in the Modern World

“A man is never as big as when he is on his knees to help a child.”